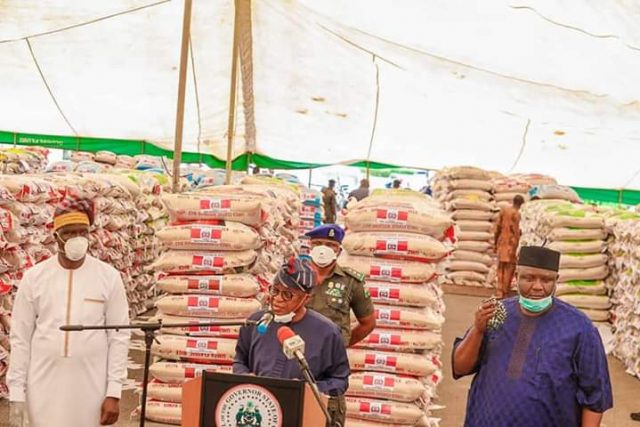 The excitement in the air was palpable. The faces of the beneficiaries who had trooped out in their numbers to receive the palliatives beamed with smiles. One could tell that these vulnerable residents of Ikire in Irewole Local Government Area of Osun were indeed grateful for the kind gesture extended to them by the State Government.

Having been home-bound since the State Government declared a lockdown to stem the raging tide of the COVID-19 pandemic, the food distribution was certainly a much-desired answer to their fervent prayers. That answer came in form of neatly packed food items such as rice, beans, gaari, semovita, eggs and noodles. From Iwo, to Oke Ila, Ikire and to the remaining LGAs of Osun, the State of the Virtuous, the testimony is the same.

When 82-year old Mama Alubosa Felicia of Ojomo compound in Boripe Local Government Area got her own palliative, she simply burst into songs of praises and matched it with dance steps, thanking God for using Governor Oyetola to, according to her, “feed her in this trying period”.

Mama Alubosa thanked the Governor for putting together the Food and Relief Committee to source for food on their behalf, stressing that the Governor is a kind-hearted man.

She said, “My son, you saw me dancing, didn’t you? That’s to show that these food items I have just received through our Governor means so much to me and I am thankful to God for giving us a man like Oyetola as Governor at this time.

“I don’t have any food at home right now. My children have not been able to send me money for food because of the lockdown and God, in his mercy, has used Oyetola to feed me. I am very happy, I pray that God should bless our Governor and the Food Committee”, Mama Florence prayed.

A widow, Mrs Rashidat Bisiru, from Oluode compound, Ada explained that things have not been easy for her kids, especially since the lockdown began.

She stated that she had not been able to go to her petty trading as a result of the lockdown, hence life has been difficult. She thanked the Governor for thinking it wise to provide food for the vulnerable which she is part of.

According to her, “I am a widow with four children to feed. I lost my husband about four years ago and I depend on a small business which I use to feed my children. Since the lockdown started I have not been able to go out and do anything and so the hunger has been severe.

“But God has sent Oyetola to me and my children in this time of need. We have been given rice and beans and I am very happy and grateful to the Governor and the Food Committee. God will bless them”.

In his own reaction, Pa Ismaila Oyedele from Ororuwo said the food palliative he just got is his only hope of meal for the next days to come. He thanked the Governor for deciding to set up a committee to feed the poor in the society, an act which he describes as wonderful.

“I thank Governor Oyetola and the 21-man Food and Relief Committee. I thank them for coming to my aid through this food items; I am assured of eating good meals at least for the next few days. God bless everyone who has continued to do this”, the 75-year old man said.

Mrs Babajide Juliana of Oduamu compound in Aagba who expressed her delight by singing songs of praise to God, said Oyetola has demonstrated the spirit of a true leader who cares for his people in difficult time.

She said, “apart from this food items we are receiving from Oyetola today, he has been doing very well for us since he became the Governor of our State. We are proud of him because we have been enjoying him.

“He has done so much for us. He never wants us to suffer any form of hardship; he is a loving and caring Governor”.

The Aragbiji of Iragbiji, Oba Abdulrasheed Olabomi, who called on other rich sons and daughters of the State to come to the aid of the poor masses at this time, expressed gratitude to Governor Oyetola for remembering the masses at their critical time of need.

Chairman, Boripe local government, Rev. Oye Adebayo expressed delight on the kind gesture of the Governor and the Committee. He said the food items distributed will go a long way in easing the pains of the vulnerable masses in the local government.

Perhaps reeling from the furor generated by earlier efforts, the State seems to have applied itself well this time around. With a fine combination of full-prove data and active involvement of relevant state and non-state actors, the distribution, unlike previous effort in the State and in other parts of the country, was hitch free and generally adjudged as transparent.

For the week-long distribution which kicked-off on 23rd May, 2020, N85 million-worth of palliatives were distributed to over 22,000 households of vulnerable groups of the State. The first in its series, the palliatives were part of the interventions by the 21-man Food & Relief Committee earlier constituted by Governor Oyetola.

For a State among the worst hit by the Corona Virus pandemic, Oyetola has earned accolades for its proactiveness and the clinical manner in which it has kept the ravaging virus, whose prevalence is now totals 44, at bay.

Significantly, the Osun palliative distribution model has been severally hailed by citizens as well thought-out, owing to its transparency and inclusiveness, especially against the backdrop of the hoopla generated by similar efforts in other States.

In ensuring that the Government targeted only the most vulnerable people in the State, the Committee adopted a scientific and rigorous process that identified target population transparently. The vulnerable persons it sought to reach include people in dire need of special care, protection and support due to severely limited access to resource and sustainable livelihood, social exclusion, poverty and inequality, such as persons with disability; elderly; poor widow; orphans, among others.

To achieve this, the State mined its Osun World Bank-approved Social Register to generate 70% of the vulnerable groups while working with other strategic groups such as traditional, Christian and Islamic leaders to reach out to other poorest of the poor, constituting 30%.

Alhaji Bayo Jimoh, former Group Managing Director, Oodua Investment Limited and Secretary of the Food Relief Committee, gave insights into the rationale for adopting the distribution framework. According to him, “the output you have seen is the result of planning and painstaking articulation of our goals and objectives. If you look at the members of the committee, they are very experienced people in varying areas such as business, intellectual capabilities and professions. We are also working with a committee set-up by the government called the Interface Committee.  We also looked at what our people would want and who are we targeting.

“We had to look at a data and got working with the Interface committee of government, using a social register that has been attested and proven to be at least reliable, auditable and traceable, for us to identify people who are truly vulnerable and have need for succor. We also had to find out what the people need through a survey. You know, essentially, we have only been talking about rice, but it will interest you to know that when a subcommittee of our committee headed by Prince Tunde Ponle did a survey, he came out to say the people are expecting garri, ewa, elubo, noodles, among others. You see, we are professionals that do research before we set out to do things, so that you give to a person what will satisfy the person and he will say thank you for.

“We then ask ourselves how we would mobilise these things and our committee agreed that everything we need should be sourced from Osun so that we can spend the money that we get within our people. This is so that the resources we get revolves and improves the gross domestic product of the State. All these it required planning and articulation. But the good news is, when we started the distribution, it was beyond the expectation of the people and they are very happy for it”.

Jimoh also hinted that so far the Committee raised over N300 million in forms of donations while also still receiving tones of food donations, in addition to crowd-funding platforms through which it rakes in funds from Osun citizens in the diaspora.

“The goodwill of the governor and the State that is making people to support us. In addition, we also have lots of companies that are donating tones of food materials. One good thing is that through technology, because the world itself is knowledge-driven, we have set up crowd-funding platforms which meant for and targeted at every citizen of the State living in Nigerian and even in the diaspora. Through that, people are donating from the diaspora. It is a marathon; we will continue to spend as long as we get money”.

Comrade Yinka Ibrahim, coordinator of the Federation of Informal Workers Organisation of Nigeria (FIWON), Osun chapter and a member of the Civil Society Organisations that monitored the distribution process lauded the clear thinking that drove the transparent process. “The distribution of palliative to vulnerable citizens across the State was impressively done. The involvement of CSOs as independent monitors of the entire process shows high level of transparency and accountability on the side of the government. It also reflects that citizens are practically involved in the exercise. The strict usage of the social register for the beneficiaries showed it was apolitical”.