Iran has issued an arrest warrant for US President Donald Trump over the drone strike that killed a top Iranian general in January, Fars news agency reports. 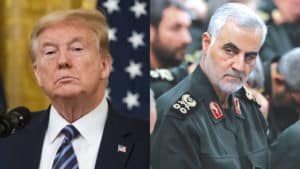 Trump is one of 36 people Iran has issued arrest warrants in relation to the death of Qasem Soleimani, commander of the Islamic Revolution Guard Corps (IRGC), according to Fars, but the Tehran attorney general Ali Alqasi Mehr said Trump was at the top of the list.

Mehr claimed Trump would be prosecuted as soon as he stands down presidency after his term ends, Fars reported.

Soleimani was killed in a US drone strike at Baghdad International Airport in January 2020 along with five others, including Abu Mahdi al-Muhandis, the deputy head of the Iran-backed Iraqi Popular Mobilization Forces (PMF).

The strike, condemned by Iran and its allies as an “assassination,” raised the spectre of further regional destabilization.