#EndSARS frontliner, Moe Odele fires back at Immigration after their explanation 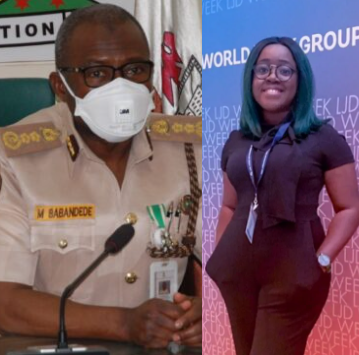 #EndSARS frontline, Moe Odele has fired back at the Nigeria Immigration Service (NIS) over the claim of seizure of her passport having nothing to do with the part she played in the demonstration against police brutality.

Recall that the spokesman for the NIS, Mr Sunday James stated that Moe’s passport was seized as part of a routine border assignment. He added that whenever a restriction is placed on any individual, the immigration service is duty-bound to enforce it.

However reacting to this, Moe queried the NIS on who ordered the seizure of her passport. She affirmed that it is an ongoing constitutional breach of Section 38 of the Constitution of the Federal Republic of Nigeria 1999 (as amended).

What is so ironic is that as a kid, I grew up hearing stories like this of folks having passports seized with no reasons. They sounded like far away tales that could never happen to me you know. But look at where we are now. A few hours before I turned 31, it happened to me. Wild

“Stop tweeting about it” Why? So the world doesn’t see this ridiculous thing that is happening?

Common guys you can do better than this. What is this razz campaign in my mentions? So shameful tbh.

Instead of rallying muppets to carry on a discrediting campaign, respectfully ask your people to release my passport. Why dis? So unnecessary.

Let’s center the main issue. My passport was taken with no reason given. This is an ongoing constitutional breach. Section 38 of the Constitution of the Federal Republic of Nigeria 1999 (as amended) DSS v. Agbakoba (1999) 3 NWLR (PT. 595)

Okay who gave the order/directive and when can I please have my passport back?

There’s no list but there’s an order. But also it was routine. 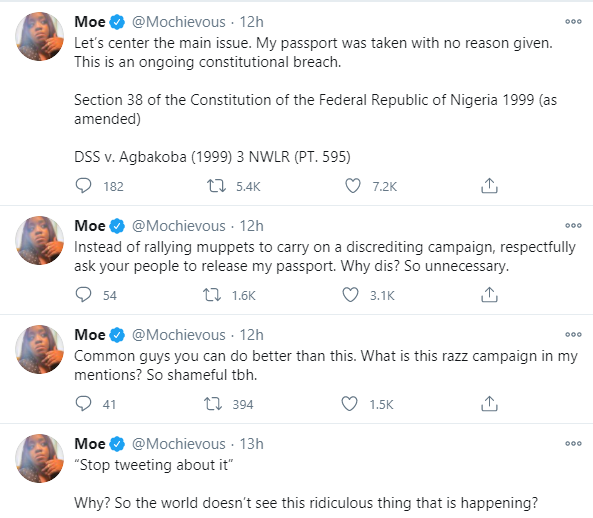