BBNaija: My son lives a better life than you – Nina blasts critics who trolled her after asking which housemates to save 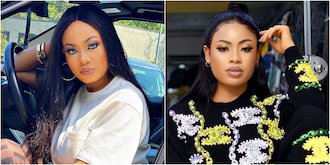 2018 BBNaija Double Wahala housemate Nina has taken to her page on Twitter to slam critics who are telling her to take care of her son.

It all started when the mother of one tweeted about who to save among the four Lockdown housemates, Kiddwaya, Dorathy, Ozo, and Prince, who are up for eviction.

Meanwhile, the reality TV star had been accused of abandoning disqualified Erica and moved to become a fan of Laycon.

BBNaija news today brings you the latest in the house
According to her accusers, she should have stood with Erica come what may as they reminded her of how her fans were by her side when she was a contestant of the show.

Nina, who did not seem to be moved by the statements, asked her followers on Twitter who they would be saving from the housemates up for eviction and some people told her to go and take care of her son.

Annoyed by that, the reality TV star told her critics to focus on their lives and stop dragging her son into the situation. According to her, her son is living a better life than the people trolling her.

She noted that her baby boy, Denzel, gets spoilt on a daily basis.