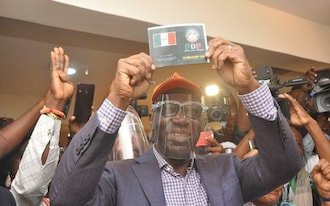 The re-election bid of Governor Godwin Obaseki has been handed a massive boost after an alleged certificate forgery suit against him was on Monday, June 29, dismissed.

The Edo state governor has been embroiled in different lawsuits surrounding his eligibility in the forthcoming election in the state in September.

Edobor Williams, Ugbesia Abudu Godwin and Amedu Dauda Anakhu in a suit with number FHC/ABJ/CS/553/2020 had accused the governor of forging his Bachelor of Arts (B.A.) certificate in Classical Studies from the University of Ibadan.

Delivering her verdict on the case, Justice Anwuli Chiekere who is the presiding judge dismissed the case due to the absence of both plaintiffs and the defendant.

The judgement came barely 18 days after the registrar of the premier university, Olubunmi Faluyi, in a statement on Wednesday, June 10, said Obaseki gained admission to the university in 1976 and graduated in 1979.

In what finally cleared doubt on the governor’s certificate, Faluyi who cited records, also stated that the governor graduated with a second class honours (lower division).